If you follow me on Instagram, you may have seen some photos I posted after I reorganised my yarn stash. I did this a few weeks ago now, fully intending on making a blog post soon after. But with how stress and parenting and life just gets in the way…I didn’t. I’m trying to get back into blogging on a regular basis, and thought that this would be a good way to jump back into it.

Before I get into that, I want to mention that I did choose winners for my giveaway over on Instagram, and I have posted them out. I ended up giving out three prizes, and two of the three have been received (or at the least, posted). 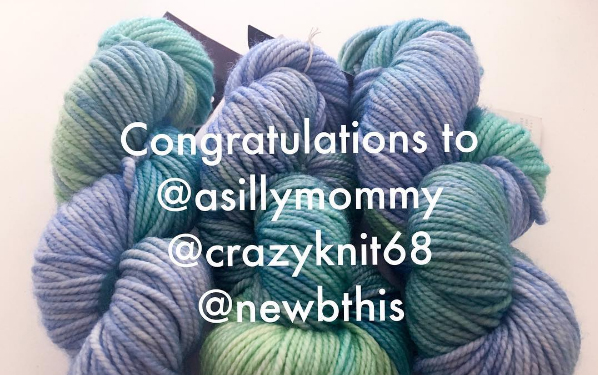 This Ella Rae chunky lace Merino is so gorgeous. When Yummy Yarn and Co get more of the pink/purple/teal back in, I’ll be grabbing some more for myself. It’s seriously delicious yarn.

Onto the yarn stash! It had been kept in the drawers of my tv table and boxes that were all over the place. I decided that since I wasn’t watching my DVDs much lately (yay for Netflix!), I might as well move them out and put my yarn in. Not only would that keep it in one place, but it would be on display and look all pretty.

We start with the obligatory before, which also showcases that I do not live in a magazine and that I’d much rather crochet than clean: Clutter happens. It had been tidier, and the missing shelf had been accidentally knocked out a while back (it was missing one of those pegs that it rests on) but I still had it. As much as I’d love to have a spotless, magazine-worthy house, I just don’t have it in me. But if anyone wants to help me clean and organise, I’m all for it 🙂

Anyway, that’s how it was. I moved took all the DVDs off the shelves, moved stuff away and started transferring my yarn over. 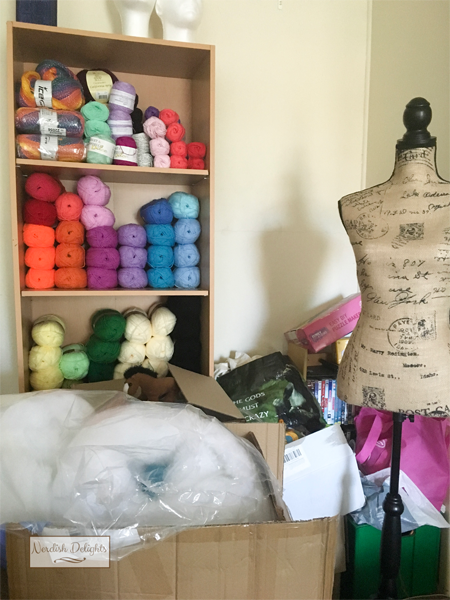 I very quickly ran out of room

I’d also had a lot of stuffing and my new mannequin delivered. I’ve since noticed that a lot of people have the same design as mine, which shows I must have (some) good taste. I bought it from eBay and liked this design better than the others on offer. I thought they were too noisy or bold for showcasing items.

So I jumped back on eBay and bought myself a shelving kit, which I of course managed to put together wrong in a few places. One day I’ll build from a flat pack and get it right first go. That’s the dream, anyway. All that empty space! It’s just begging to be filled with yarn. I had been given some really cool storage boxes from a friend of mine, so now was also the right time to put them to use. That was SO much better, though it certainly wasn’t all my yarn. I have some older stuff stashed out in the spare room, along with a bunch of half used stuff that needs to be caked. Since this photo was taken, I have also received a few more deliveries of yarn, so things had to be rearranged a bit more. Let’s just say that my shelves are very, very full, and I’m not crocheting anywhere near fast enough. The majority of the yarn I have has been earmarked for projects, so it’s a matter of finishing my current WIPs and getting to them. My yarn stash is so pretty. I love looking at it, knowing what I’ll be making with most of it. It’s all so gorgeous.

The two smallest boxes are great for my Nerdish Delights stationery – the business cards, care cards, stamp, envelope seals, tags, and twine in one, and buttons, glue gun, glue sticks, wooden letters, and my pom pom makers in the other. I have a lot of other buttons which I haven’t taken out of my craft box (a tackle box I got from K-Mart that is perfect for holding hooks and doodads), so I better get to that soon. 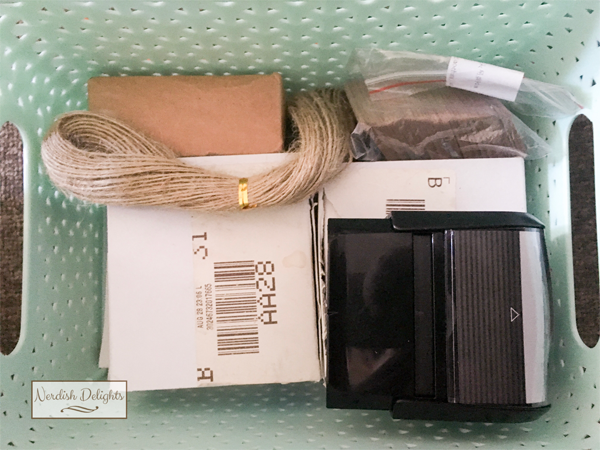 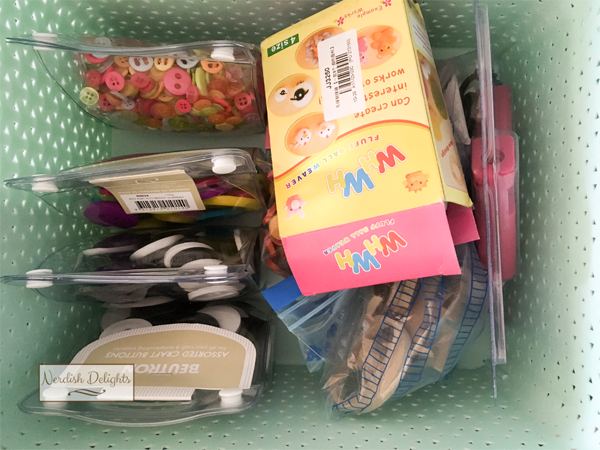 The middle two baskets hold stuff I probably don’t need (or won’t, for a long time), but I couldn’t resist. Just in case I end up at a market or craft fair, I have these super cute mini chalkboard signs in both tall and short, liquid chalk pens, and extra chalkboard stickers. These are also cute for photo shoots, though I’ve only used them for that once. I also have a bunch of stuff for wrapping orders in before shipping, with a variety of twines, ribbons, and washi tape (more not pictured) to make the packaging pretty. 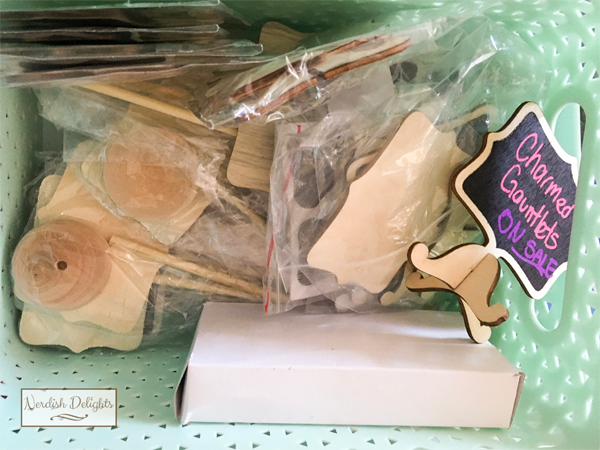 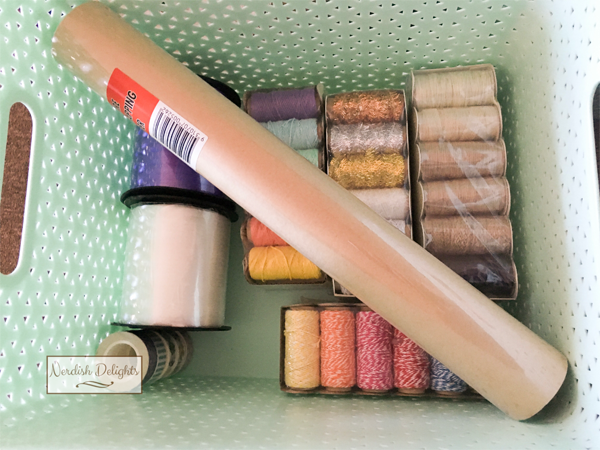 One of the large boxes holds all the fabric I have for lining bags (in blue, white, red, and yellow), which I somehow forgot to take a picture of, and my current stash of ready-to-ship goods. You can see my Charmed Gauntlets on the left there (they’re FINGERLESS GLOVES WITH POCKETS. I’m so proud of these), along with a Charmed beanie, and a few messy bun hats, too. You can check out my Etsy if you’re interested in my patterns or finished items. 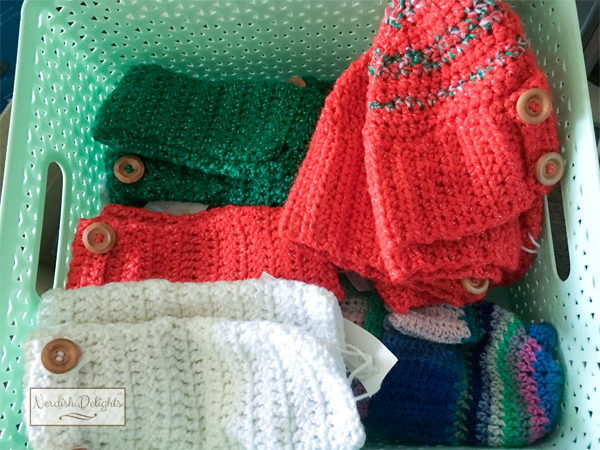 I love how organised it all is. I still have a disaster area going on on my couch, with at least six WIPs and a bunch of yarn taking up space. I’m trying to crochet faster, but pain issues and parenting stuff and the heat (ohmygodtheheatwasawful) had me slowing down a lot.

The best part of all of this for me was getting my supplies organised and looking pretty – I consider it to be a type of evolving art that makes me feel happier. My daughter loved all the deliveries I was getting, and not just because it meant she had a pile of boxes. She set up a box city in the hall at one point, giving me strict instructions not to take it apart. I lasted about two weeks before I dismantled it. I think showed great restraint. Now I need to get to organising the rest of my house…but that’s not so fun.

She does love playing in boxes still, which I love. She’s 10 next month but still does a lot of imaginative play. As I took the photo below, she growled at me that I was messing with the wrong box 😀 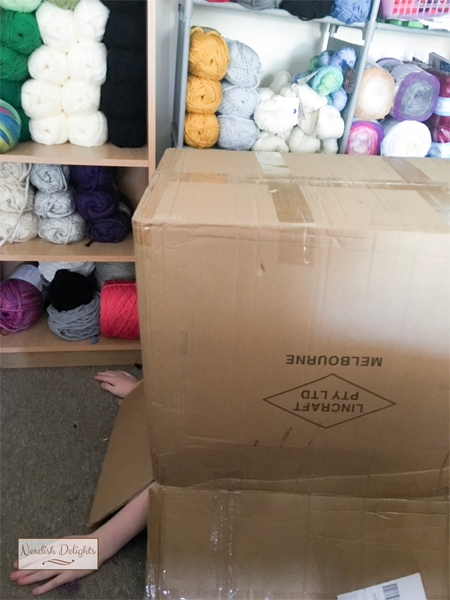 I also received my fantastic and gorgeous leather labels. I ordered these from Leather Goods Company on Etsy. 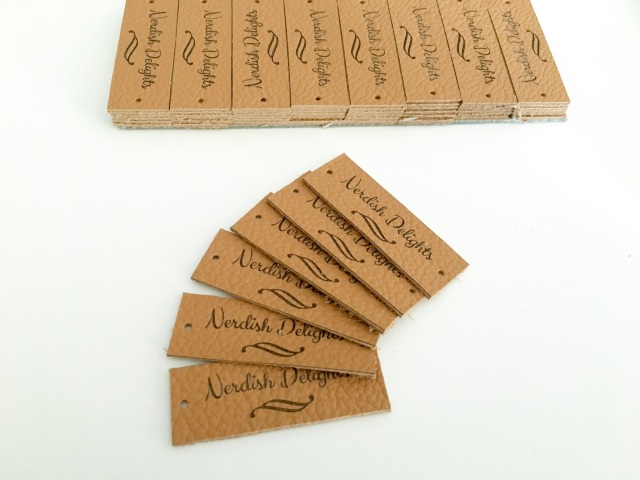 And you need to check out this gorgeous yarn subscription box I got from Mislet & Dandellie. DROOOOOL. I have no idea what I’ll make with it, but it’s so damn pretty.

I really need to get myself a bib, I think, because I keep drooling over my supplies.

I’ll be getting into pattern writing soon, if I’m able to translate my scrawls and scribbles into a readable language. I’m still working on the second run of a few patterns, that I will be releasing as a pack soon. It’s more on the “ish” side of things, but still kinda nerdy. I’m really pleased with them, and I hope others will be, too.

We’re still figuring out how we’ll be doing this homeschooling thing, but I know it’ll fall into place soon. And now that it’s officially autumn (though the weather probably won’t cool down a lot for another three months) I’m hoping that it will start to be more consistently cooler, because all these heatwaves have been sapping my energy and focus. Also, I hate summer. Bring on winter! Though it doesn’t get that cold where I am, and anything close to snow would be a freak weather event, it’s still much better than summer. 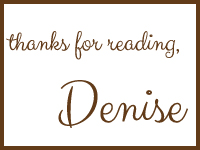