One thing I like about the C2C stitch is the ability to fix some mistakes without having to frog it. I’ve been extra tired this week, so I noticed three blocks were the wrong colour (yay for not paying attention :P) and had the choice of frogging it all the way back or trying to fix it. Since the mistakes were 15 rows ago, I opted for fixing them. Which I did, and I am pleased with those results. As long as you can remember which direction you’re going in, it’s not too hard, and it’s much easier if it’s when you’ve changed colours, rather than in the middle.

This square is the stag from the Fraser brooch. I couldn’t quite fit a leaping stag in there, so I opted for just the head.

I wanted it to have the impression of being in a brooch, which I think I achieved. I was running low on my dark grey yarn and thought I might run out, but not this time. Phew! Aside from messing up those squares I mentioned earlier (but won’t point out, as they’re fixed), I only noticed one other mistake after I’d woven the ends in. I swore a bit and then sat there trying to decide what to do about it, before I gave up and went to bed. I looked at it again this morning and decided that I’d leave it as it is. I could try to unpick the ends that were woven in and undo that block before correcting it, but I really didn’t want to.

It will annoy me, I’m sure, but I know that I would become quite frustrated with trying to fix that up, since the ends are woven in, and I’d rather avoid that. I remember reading a book years ago, where it was mentioned that rug makers would leave in certain mistakes as “perfection makes the gods jealous.” I have no idea what book it was from, and I’m not at all religious, but I’ll go along with it. Sleep hasn’t been the best this week (despite my pain medication making me drowsy during the day!), so I haven’t been at my best.

Then while I was weaving the ends in, my needle broke! I’ve been using the Susan Bates finishing needles, which I love. I’d been using  the light blue one, as it was the perfect size, but it upped and disappeared on me one day, while I was using it. I’d pushed it through the panel I was working on to shift over as my daughter snuggled on the couch next to me, and it must have fallen out into another dimension, because I have no idea where it went.The yellow one is too small for my liking for this work, and it’s not as strong as the one I lost. I moved up to the other blue needle, which was pretty good. Until this happened last night: 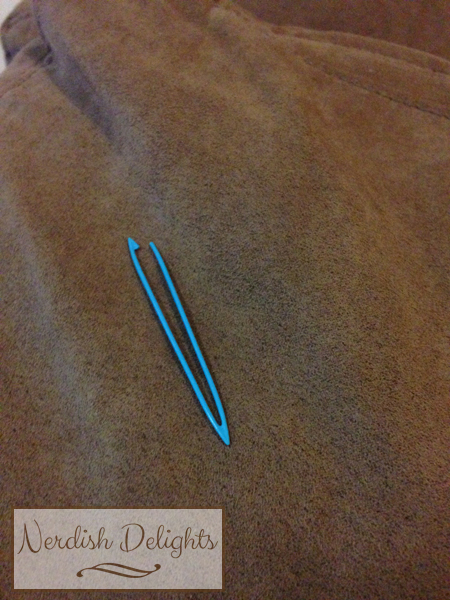 I’m now using the red one, which is bigger than I’d prefer but is stronger than the yellow. I may have to either buy another set to get the blue ones again, or pull the couch apart to see if the lost one is hiding somewhere. I’ve pulled it mostly apart, but not the whole way as yet.

Anyway, this panel has had some trying moments, so I will leave it as it is an move on to the next.

I have all the other panels written up and ready to go, so hopefully I have enough white yarn in the house to finish them. I really don’t want to have to buy more just yet, but will if I need to. I can’t believe I’m saying I don’t want to buy yarn!

You can get the PDF here